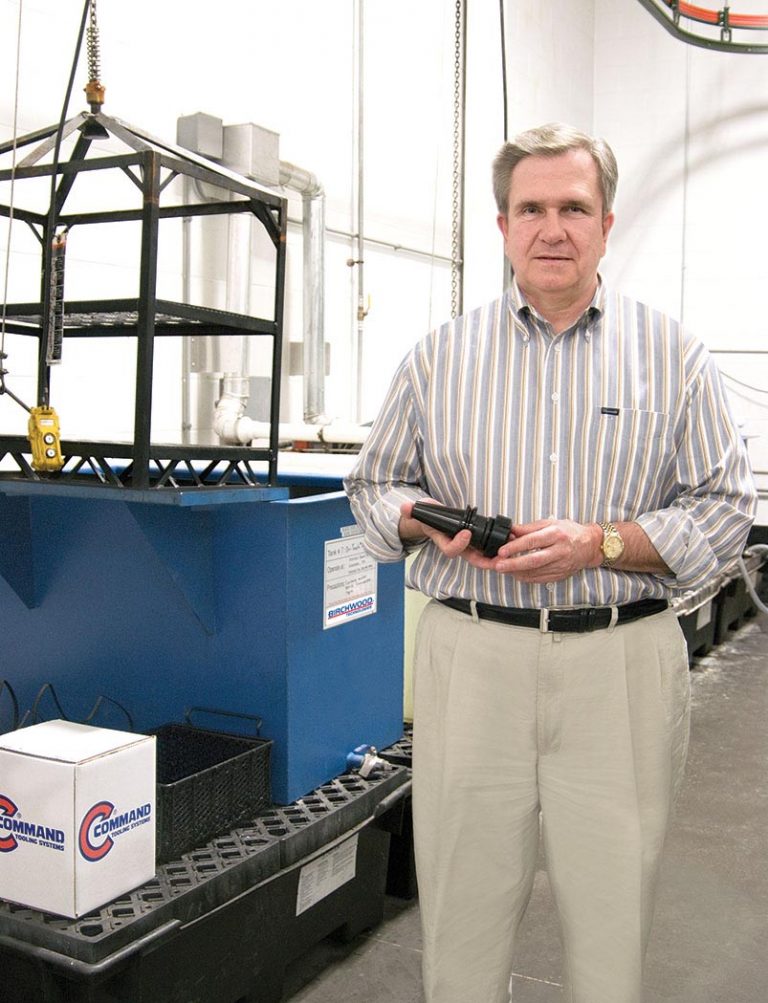 "Command is expanding its markets beyond the borders of North America," reports Rubenstahl. "We are dedicated to continuing the formula that has made Command the premier toolholder manufacturer in this country – Quality, Delivery and Service."

By adding the Birchwood Technologies Tru Temp system, Command is able to control the blackening process and shorten the turnaround time from days to just minutes. "Our customers rely on fast toolholder turnaround time. Bringing the blackening process in-house with Tru Temp has been very beneficial in many areas, including deliveries," stated Rubenstahl. 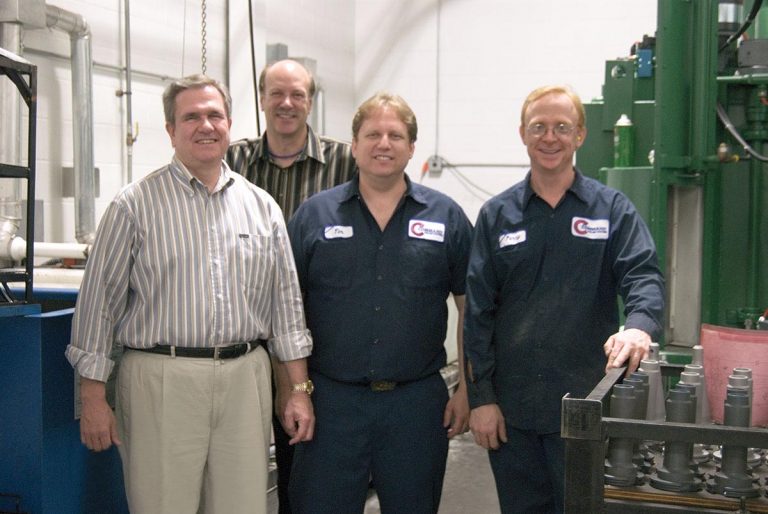 Command has considered adding its own in-house black oxide finishing system in the past, but a growing preference for shiny shank toolholders along with other factors caused a drop in blackening needs up until a few years ago.

"We are committed to a continual improvement program for all of our manufacturing processes," reported Tim Gerbozy, Command's Manufacturing Manager. "When Birchwood Technologies presented their new non-polluting Tru Temp process, we found a way to accomplish a number of manufacturing improvements. Our first was the quality of our toolholders." As Command expanded globally, the best corrosion protection was needed in addition to the best looking black finish available. Command has had a long and satisfactory experience with traditional hot oxide from outside vendors, and weren't comfortable dealing with toxic chemicals in-house. So when they were introduced to the Tru Temp blackening process, which included all the benefits of the hot oxide process but none of the hazards, Command started to evaluate bringing the Tru Temp process in-house.

Tru Temp is different from traditional hot oxide finishes with one important exception – the finish. Tru Temp is equal to or better in both appearance and corrosion protection. Most of Command's BT and V-flange toolholders that require blackening are made of 8620 alloy steel for which the Tru Temp finish is an attractive, uniform black – even in recessed areas. (These are often a problem for conventional hot oxides because unsightly salt leaching can occur). The Tru Temp finish is a satin black magnetite just 0.5 microns thick (20 millionths) with no effect on part dimension or material hardness. The finish withstands up to 100-200 hours of neutral salt spray (ASTM B 117) or several hundred hours of humidity (ASTM D 1748), both verified by independent testing. This is important and facilitates both ocean shipment and dealer storage. 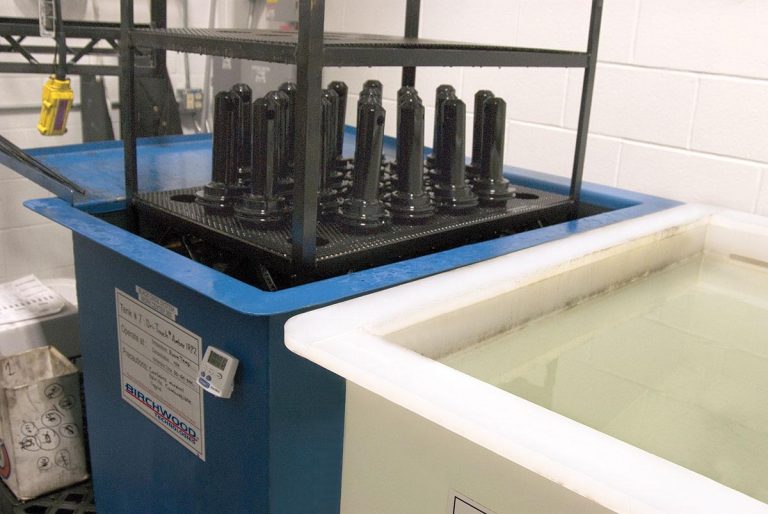 Up to seventy toolholders are processed in custom racks, with up to three racks in the finishing cycle at one time. The Tru Temp process from start to completion takes just 34 minutes. 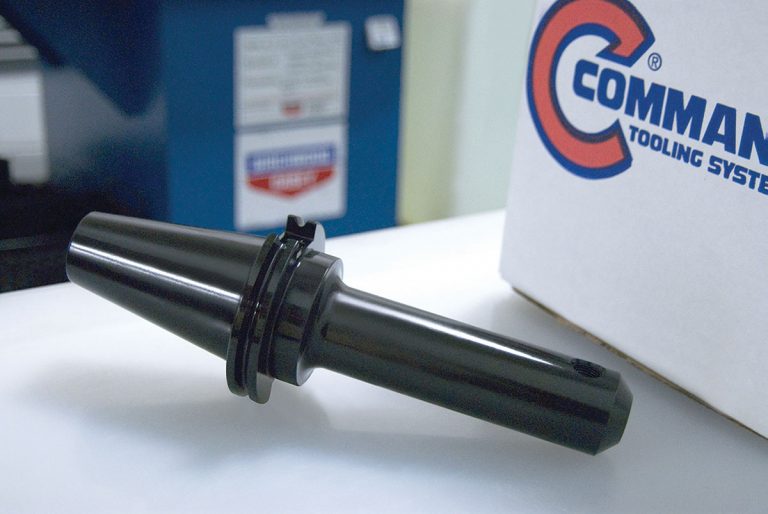 With Birchwood Technologies' design assistance, Command configured its finishing line to operate with an overhead hoist in conjunction with a newly added bead blasting system, both set up in a separate room near its precision machining operations. Because the new Tru Temp system is modular and pre-engineered, it configures easily in most areas. For Command, basic installation took less than a day.

The system utilizes seven 100-gallon capacity tanks (24 x 40 x 28 inches deep), with overall line footprint of 4 feet x 22 feet. Tanks are ruggedly constructed of 10 gauge welded steel (epoxy painted) and 3/4 inch welded polypropylene, and are supplied with all the necessary heaters, plumbing connections and spill containment. The finishing line is on one side of the room with the Abrasive Blast Systems bead blaster opposite. Two ¼ ton Harrington hoists run on an oval track above both tank and bead blaster setup for fast and easy movement of toolholder/components through both systems.

To facilitate toolholder processing, Command designed custom racks with changeable inserts to accommodate toolholders of various shank sizes, holding from 39 to 137 toolholders at a time. The toolholders first travel through the bead blaster to remove heat treat scale and are then loaded onto the racks and hoisted through the black oxide process line. Once blackened, the toolholders are returned to production racks as they travel back into the main shop for finish machining. This scenario keeps product handling to an absolute minimum.

Positioning the finishing line with the adjacent bead blasting system allows one person to operate both. While processing time for the tank line and bead blaster is fast, sufficient intervals occur to allow one operator to move racks of toolholders on wheeled carts into the room and through each of the various finishing stations with maximum efficiency. With this setup, every square foot of space is used judiciously, minimizing both part moves and part travel. The toolholder carrier baskets, for example, hold up to 500 lbs. per load. A single load can hold up to a hundred smaller retention knobs. The power hoist allows the operator to raise, lower and move full loads quickly with minimal effort. When completely loaded, the carrier baskets utilize to the fullest the entire surface processing area within the tanks.

Processing of parts through the series of tanks is very efficient using the hoist system. One batch of parts can be cycling in a tank while a new batch is being queued, moved and immersed in another tank. In this way, two carrier baskets can be in process at one time to maximize the speed and output of the system. 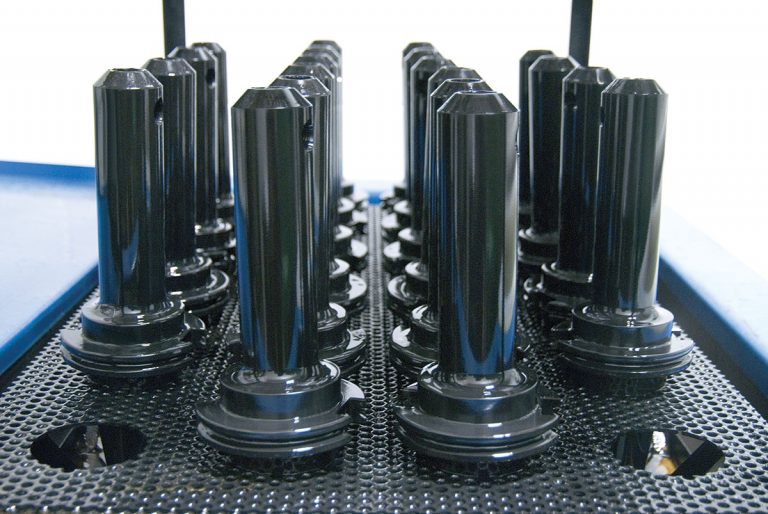 The Tru Temp finish is equivalent to hot oxide. The deep black uniform appearance and corrosion protection costs per part is less and the finish is done in 34 minutes compared to 3 days when sending parts outside for hot oxide.

Advantages of the System Include Lower Per Part Finishing Cost

The Tru Temp process is safe and easy to use because the solutions are odorless, non-splattering and of low concentration. The process is designed for long bath life without the need for routine dumping. Solution monitoring and control is simple using a color change test that indicates proper concentration level. Because the Tru Temp process contains no EPA regulated chemicals, there is no need for waste treatment equipment in Command's new installation (just pH adjustment prior to disposal). This is true for most sewer districts – the rinse waters are considered to be sewerable as non-hazardous effluent. For this reason, the initial capital investment is only half that of other blackening processes.

Gerbozy's staff quickly learned how to get the most out of the system. Written procedures documenting bath times, finish quality expectations, best racking solutions for various shaped parts, testing solution concentrations and basic system operations helps bring new operators up to speed and shares knowledge across three shifts of operators. Access to this knowledge frees up supervisor time and instills a level of confidence in the operator for taking on additional tasks like bead blasting and a small amount of maintenance to the system so that both operate at maximum efficiency at all times.

Gerbozy calculates that the system currently blackens 400 toolholders and an equivalent number of retention knobs in an 8-hour shift with capacity to triple that output. Because the maximum number of toolholders are finished per load and move through the system quickly, Gerbozy calculates that finish costs are much lower compared to sending them outside for finishing. "The real savings is eliminating the 3-day turnaround time", said Gerbozy. "With this system, I maintain control of what we're making and its costs. If things are outsourced, I lose the control over the quality and delivery."

Command's operators like using the new blackening setup. There's no guesswork or complicated formulas to follow. The mild Tru Temp blackening solution operates at a moderate temperature that is well below the boiling point, so the severe splattering and boilover hazards of ordinary black oxides are not present. For Command, using its part container baskets, the blackening process takes 34 minutes compared to twice that for ordinary hot oxides.

"Customer service was also a factor in the selection of the in-house Tru Temp process", commented Gerbozy. "We were comfortable knowing that we had a supplier with experience in designing the right system and being available on-site for follow up service to ensure everything operates properly. Our customers expect the best from us, and the Tru Temp system lets us offer high quality blackened toolholder finishes.

Didn't find what you are looking for?