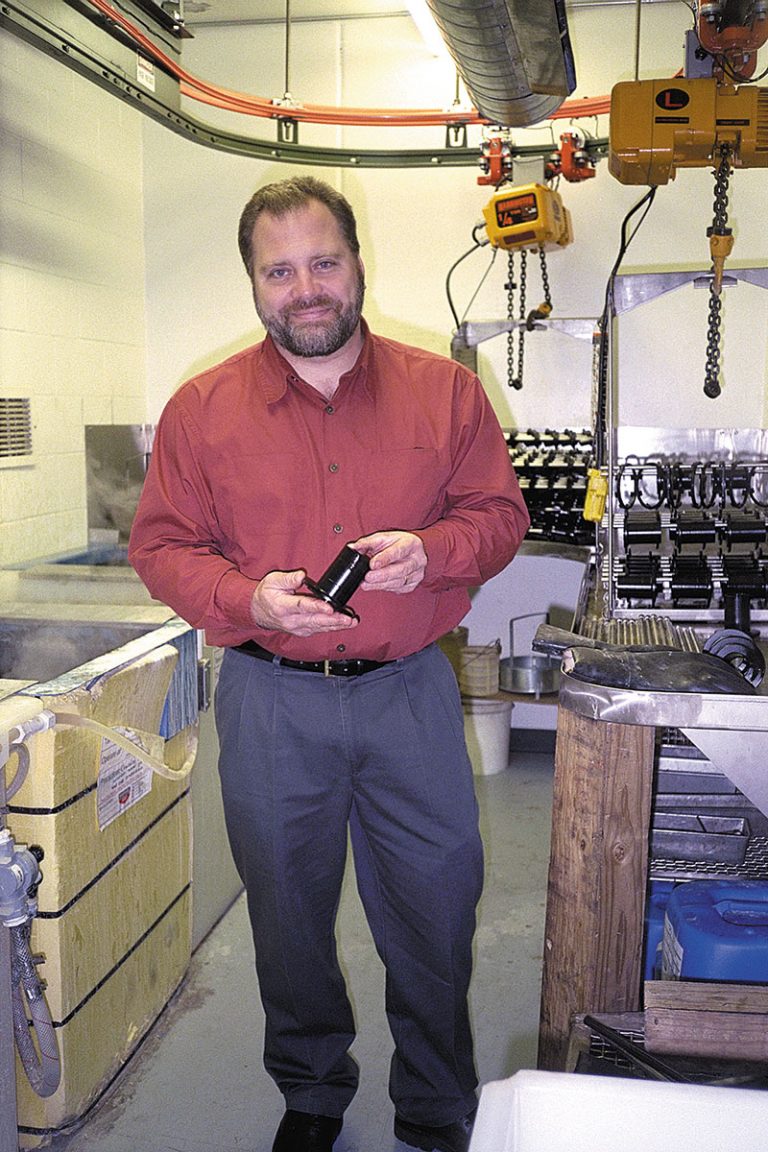 When Mate Precision Tooling moved to new 250,000 square foot facilities four times the size of its previous operations, it decided it was also time to upgrade how it was handling the blackening of tooling assemblies.

Mate operates a "Fast Track Manufacturing System" in which over 300 high precision machining centers are connected via Ethernet for fast, effective scheduling and production of tooling components. Some of the tool components require finishing as part of this just-in-time product delivery system. The old way of sending some parts outside for hot oxidizing and finishing others in-house with a cold process was no longer efficient.

Mate had been operating a cold blackening line before making its move to new facilities. The system consisted of seven, 40 gallon immersion tanks located adjacent to bead blasting equipment used to prepare the tool components for finishing. This tank line worked well enough but with a 3000 percent increase in the number of products Mate manufactures in the last 5 years, a larger system in the new facilities was required. Also, Mate wanted to find a way to avoid sending parts outside for hot oxide finishing which did not mesh with its same day turnaround on standard tooling orders.

What Mate hoped to achieve was a way to do all of its blackening in-house without resorting to traditional hot oxide methods and all of its hazards. When investigating alternatives, Mate's material manager, Bill Dahlquist, heard Birchwood Technologies was about to introduce a new technology – a mid temperature black oxide process called Tru Temp, which didn't have the operator hazards of the hot oxide process or the pollution problems.

"We were satisfied with the cold finishing system and process we were using," said Dahlquist. "But we had some parts that couldn't handle the cold process and had to be sent outside for hot oxidizing. We needed a better way, one that would allow us to do all of our finishing in house to avoid shipping delays. Zach Johnson of Birchwood Technologies encouraged us to investigate his company's new 100 gallon Tru Temp finishing system because he believed it would give us the quality we required with the process speed and capacity needed for our expanded operations." 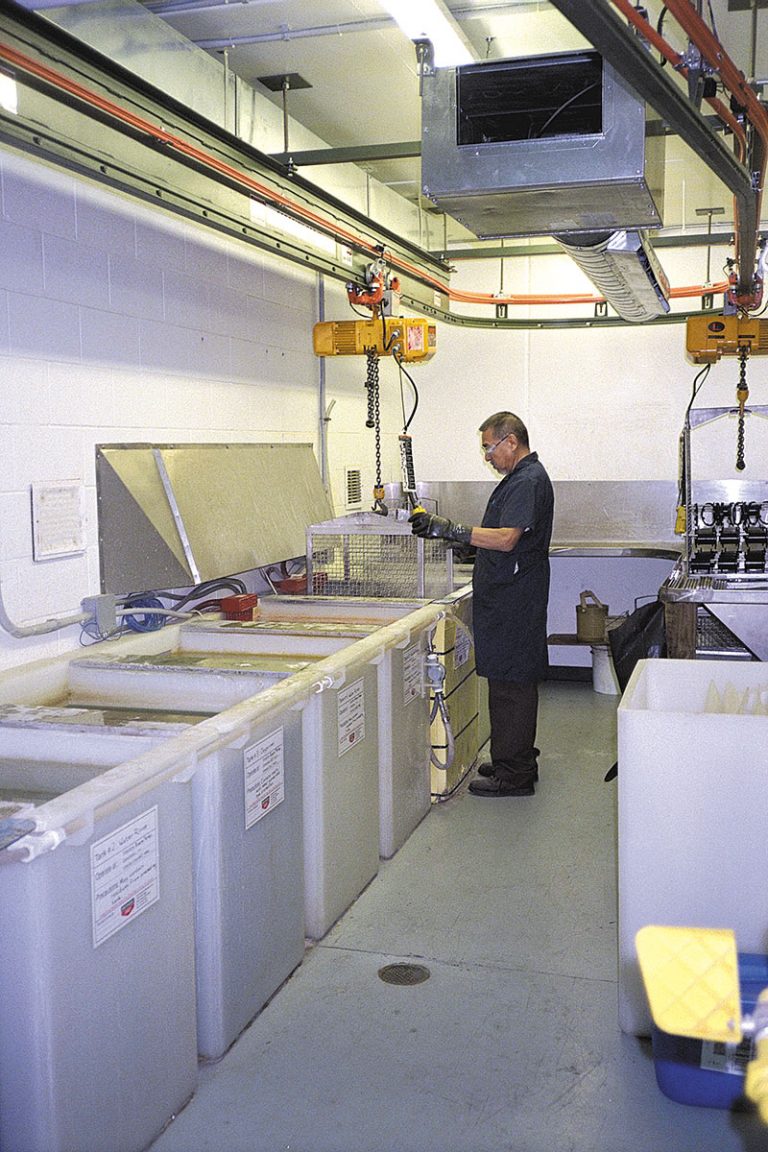 Mate's tooling systems are high precision and very high quality. They are used in virtually every model CNC punch press for fabricating all types of metal products, everything from complex electronic cabinetry used in telecommunications to appliances and computers. Because Mate's tool components are the highest quality and well known for their long life, individual tool components that require finishing must have high corrosion protection and a high quality appearance.

"When looking at finishing alternatives, we wanted to be certain of the quality of the finish," said Dahlquist. "Turnaround time was important but we also had to have a top quality appearing finish that provided good corrosion resistance."

The components Mate finishes include die holders, tool loading cartridges and die plates. The finish is primarily for corrosion protection and appearance. The tools themselves – such as punches, dies and strippers – do not require finishing.

Zach Johnson of Birchwood Technologies recommended its new Tru Temp 100 gallon tank system, which had the capacity of doubling the output of Mate's previous, 40 gallon line. More importantly, the Tru Temp process produces a true black magnetite finish of 0.000020" thickness, with an attractive satin black appearance, equal to that of regular black oxide but without the extreme temperatures, safety hazards and pollution problems associated with the traditional hot oxide process.

Mate's testing of Tru Temp proved more than satisfactory, according to Dahlquist, meeting both appearance and corrosion resistance requirements. Part finishing time and costs were also lower. The testing was done over a period of weeks prior to the move-in to Mate's new facilities. Once the decision was made, the new 100 tank system was installed and full operation initiated, eliminating the need for oxide outsourcing. 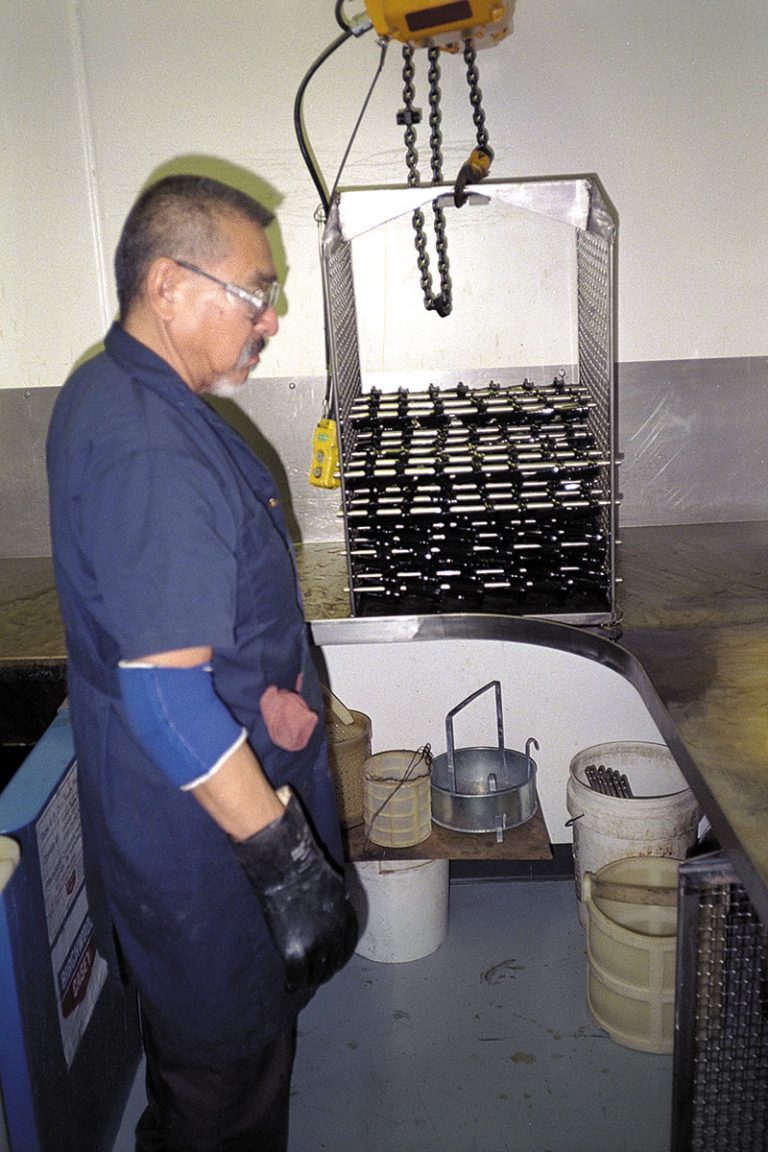 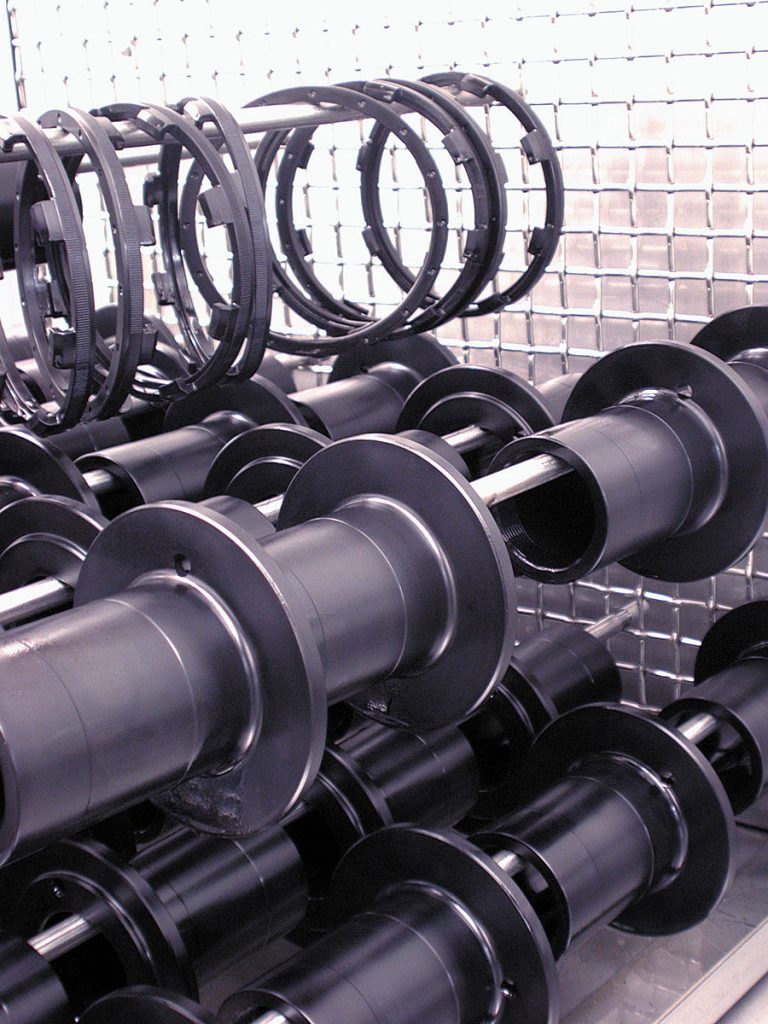 Mate provides 24 hour service on customer tool orders seven days a week. This "never sleeps" operation means finished components for tool orders must be produced quickly within a day of when the order is received. The old way of sending some tool components outside for hot oxide could delay orders for several days, even weeks. The in-house Tru Temp system provided the solution. Utilizing two-step chemistry (patent applied for), a single batch of toolholder components previously sent outside that took up to four days were finished by Mate in-house in about 30 minutes. The finish was a true black magnetite of 0.000020" thickness, with a deep, satin black appearance, equal to that of regular black oxide.

With assistance from Birchwood Technologies' customer support department, Mate configured the 100 gallon Tru Temp line into a customized finishing cell. The system included an oval-shaped overhead hoist for moving parts in and out of the tank line and custom designed immersion part carriers, which hold parts during the finishing cycle. The cell included portable drying racks and drain table.

In setting up the new finishing line, Mate engineers wanted to build tanks and drying table into an 8 foot by 22 foot corner area enclosed with walls on three sides. Because the new Tru Temp system is modular and pre-engineered, it configures easily in most areas. For Mate, installation took less than a day.

The system utilizes tanks of 100 gallon capacity, each measuring 24 x 36 x 36 inches deep, with Mate's overall line footprint just 3 feet x 20 feet. Tanks are ruggedly constructed of either 10 gauge welded steel (epoxy painted) or 3/4 inch welded polypropylene, and are supplied with all the necessary heaters and plumbing connections. The tank line was positioned along one wall with the end tank fitting into a corner. A stainless steel drying table was installed so that it connected to the final rinse tank.

Forming a U-shape, the tank line and drying table are positioned against the three walls. The hoist track runs directly above the tank line. The operator rolls the part carriers easily from tank to tank raising and lowering them electrically into the individual tanks. The stainless steel drying table is positioned opposite the finishing tanks where completed parts are gathered and moved to an adjacent assembly area.

With this setup, every square foot of space is used judiciously, minimizing both part moves and part travel. The stainless steel carrier baskets, for example, hold up to 500 lbs. of parts per load. A single load can hold up to a hundred smaller parts and up to two dozen of the largest tool components. Using the old system without the power hoist, loads were limited to a much smaller number of parts, primarily what an operator could manually raise and lower into the tanks. Also, the carrier baskets, completely loaded, utilize to the fullest all of the surface area within the tanks.

Processing of parts through the series of tanks is also much more efficient using the hoist system. One batch of parts can be cycling in a tank while a new batch is being queued, moved and immersed in another tank. In this way, up to three carrier baskets can be in process at one time to maximize the speed and output of the system. 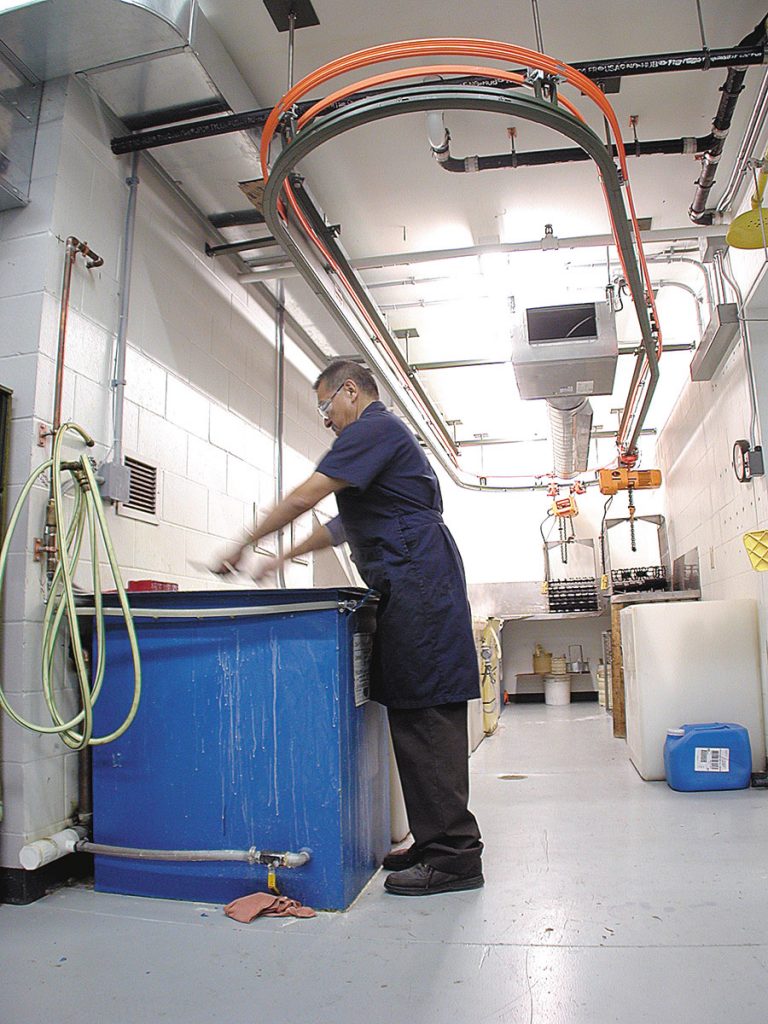 The power hoist positioned above the finishing system maximizes part throughput. Operators can move and finish part loads up to 500 lbs. where in the previous system loads were limited to 50 lbs. or less.

Because more parts are finished per load and move through the system faster, Dahlquist calculates that finish costs are lower compared to the previous system, especially for the smaller parts. "The system is easier to operate," reports Dahlquist. "We're putting more parts through for finishing in one eight hour shift or less where before it took up to one-and-a-half shifts to process fewer parts."

Dahlqust notes that Mate's finishing operators are well trained and know how to get the most out the system. No longer burdened by having to organize parts to be sent out for finishing and those to be kept inside for finishing, planning part throughput is easier. Whenever possible, 3 part loads are processed at one time. This maximizes the effort and finishes more parts in less time. It also frees up the operator for other tasks including a small amount of maintenance to the system so that it operates at maximum efficiency at all times.

Dahlquist and his operators said the Tru Temp process is safe and easy to operate because the solutions are odorless, non-splattering and of low concentration. The process is designed for long bath life without the need for routine dumping. Solution monitoring and control is simple using a color change test that indicates proper concentration level. Because the Tru Temp process contains no EPA regulated chemicals, there is no need for waste treatment equipment in Mate's new installation. This is true of most sewer districts – the rinse waters are considered to be sewerable as non-hazardous effluent. For this reason, the initial capital investment is only half that of other blackening processes.

Another benefit, the amount of bead blasting to prepare components for finishing has been reduced by over 50 percent, according to Dahlquist. Most heat treated parts, with only a light scale, can be successfully blackened directly, where previously, residue or scale had to be removed with bead blasting. 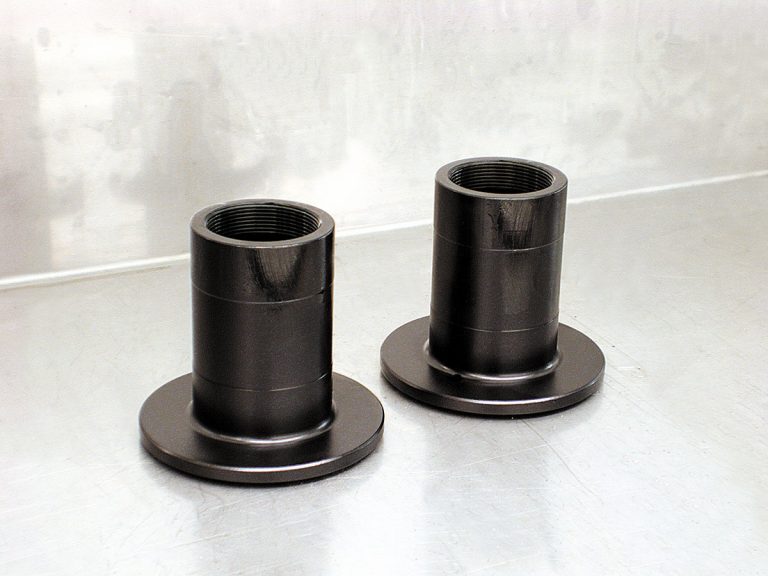 The Tru Temp finish is equivalent to hot oxide. The deep black uniform appearance and corrosion protection costs per part is less and the finish is done in minutes compared to 3 to 4 days when sending parts outside for hot oxide.

Using Tru Temp, Mate's blackened parts have an overall uniform appearance, even those that have very complex shapes and configurations. These components include various alloy and tool steels such as 8620, 4150, M2, S7 and A2. The satin black magnetite finish is just 0.5 micron thick (25 millionths) which does not effect part dimension or material hardness, and withstands up to 100-200 hours of neutral salt spray (ASTM B 117) or several hundred hours of humidity (ASTM D 1748), both verified by independent testing.

The mild Tru Temp blackening solution operates at a moderate temperature that is well below the boiling point, so the severe splattering and boilover hazards of ordinary black oxides are not present. The Tru Temp process is fast. For Mate using its part container baskets, the blackening steps take around 30 minutes compared to twice that for ordinary hot oxides.

Mate's processing sequence is as follows:

"Tru Temp is so good that even on the difficult parts we sent outside for hot oxide treatment, we can now finish all of them in-house," reported Dahlquist. "That's really helping our part turnaround time.

Didn't find what you are looking for?